01: characteristics of Shop Lighting in various countries
Each country has its own characteristics in specifying the illuminance value required for shop lighting. It can be roughly divided into two categories: simple and detailed.

Time:2022-09-09 From:SEEPOSH—Connie
01: characteristics of Shop Lighting in various countries
Each country has its own characteristics in specifying the illuminance value required for shop lighting. It can be roughly divided into two categories: simple and detailed.


(1) Simple class
① German din5035 only lists the illuminance values of department stores, supermarkets and windows, which are required to reach 500lx, 750lx and 1000lx on the 0.85m horizontal plane.

② Australian as1680-1976 only proposes illumination values for general lighting and commodity display in stores. The former is required to reach 300ix on the 0.85m horizontal plane, while the latter only wants to increase local lighting, and no specific value is proposed.

③ CIBS 1984 of the United Kingdom stipulates that regular sales methods and supermarkets are separated, but the illuminance value is required to be 500ix. The difference is that the former refers to a horizontal plane of 0.8m and the latter refers to a vertical plane of 1.5m. 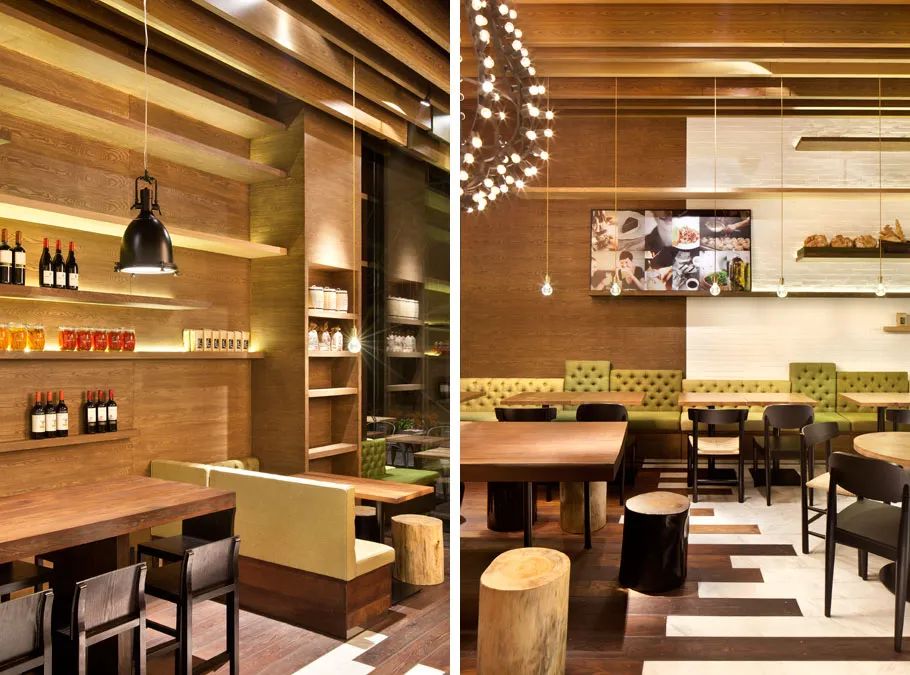 (2) detailed category
① Japanese jisz9110 (1979) not only divides the lighting of the business hall into four parts according to function: general lighting, general display, key display and window, but also proposes different illumination ranges according to the nature of the store (such as eight categories of daily groceries, supermarkets, department stores, etc.). 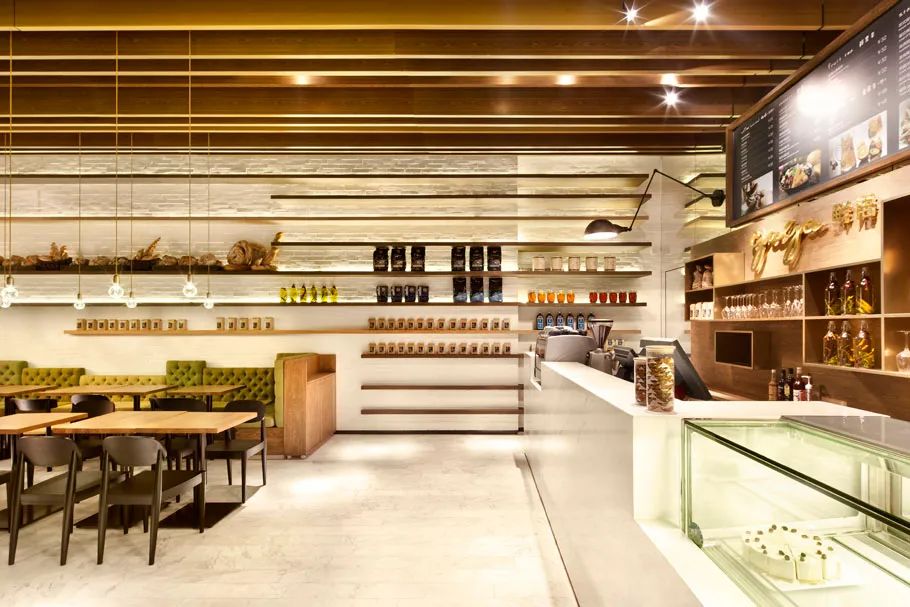 ② Another typical example of this kind is the United States, which is characterized by not considering the nature of the store at all, but only considering the different functional requirements in the business hall. It is divided into four parts: the mobile area (not the area for displaying, selecting and selling goods), the sales area (including counters, shelves and areas for customers to evaluate, select and buy goods), the special display (displaying new and special goods to attract customers' attention), and the window, And different illumination ranges are specified respectively. 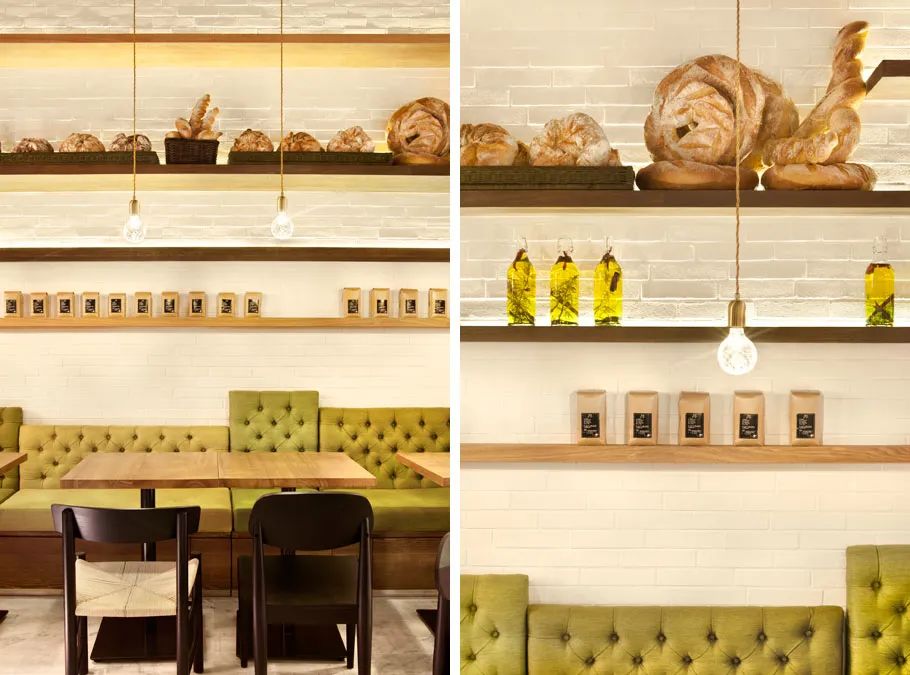 The illuminance ratio of these four parts is 1:3:15:20. In 1966, it was determined according to the sales method (i.e., clerk service or self Collection), and in 1976, it was changed to determine a certain value in the specified illumination range according to the speed of the transaction process (i.e., the familiarity of customers with goods). Illuminance is measured by the plane where the commodity is located, which can be either a horizontal plane, a vertical plane or other inclined planes. 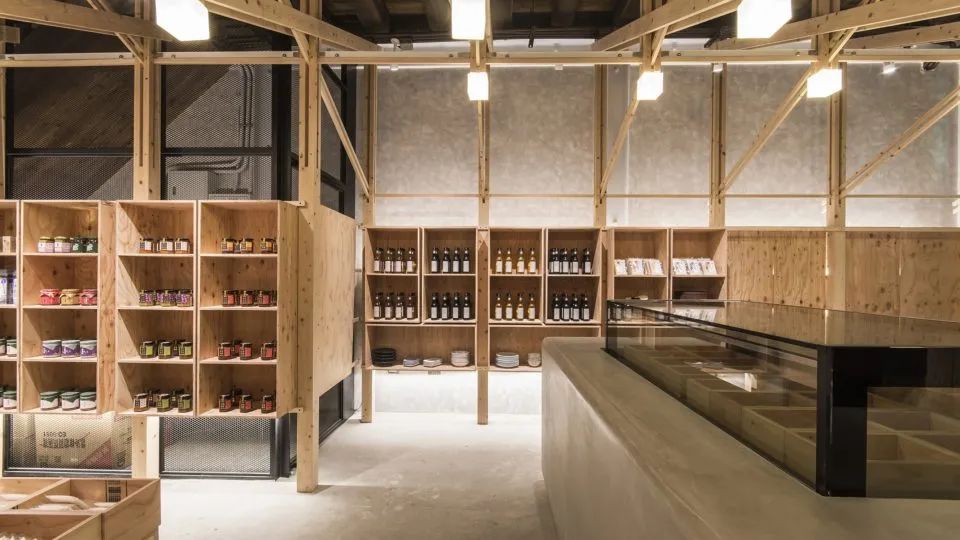 To sum up, there are great differences in the formulation format of store lighting standards in various countries. As for the specific illuminance value, most countries take the 0.8 ~ 0.85m horizontal plane as the reference plane for specifying the illuminance value.

Such a height can be regarded as the counter top. The requirements for it abroad are roughly between 150lx (Japan's low limit), 200lx (the Soviet Union's low limit) and 1000lx (Japan's and the United States' high limit), which are quite different.


02: current situation of Shop Lighting in China
In order to understand the current situation of Shop Lighting in China, 137 shops with high lighting level in 10 large and medium-sized cities, such as Beijing, Shanghai and Guangzhou, were investigated.
The total average illuminance of the measured shops is 140lx for shelves (1.5m high in vertical plane), 123lx for walkways (ground), and 173lx for counters (0.8 ~ 1.0m horizontal plane). 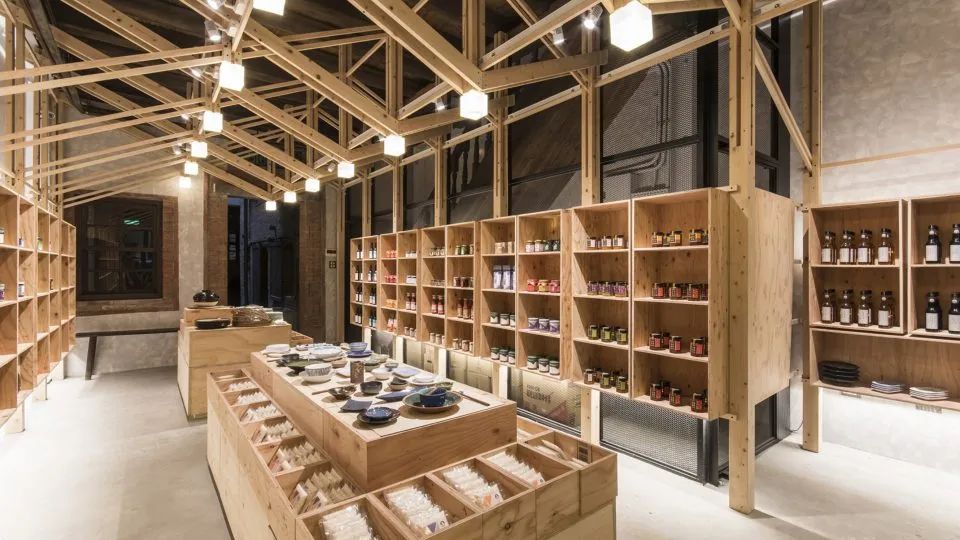 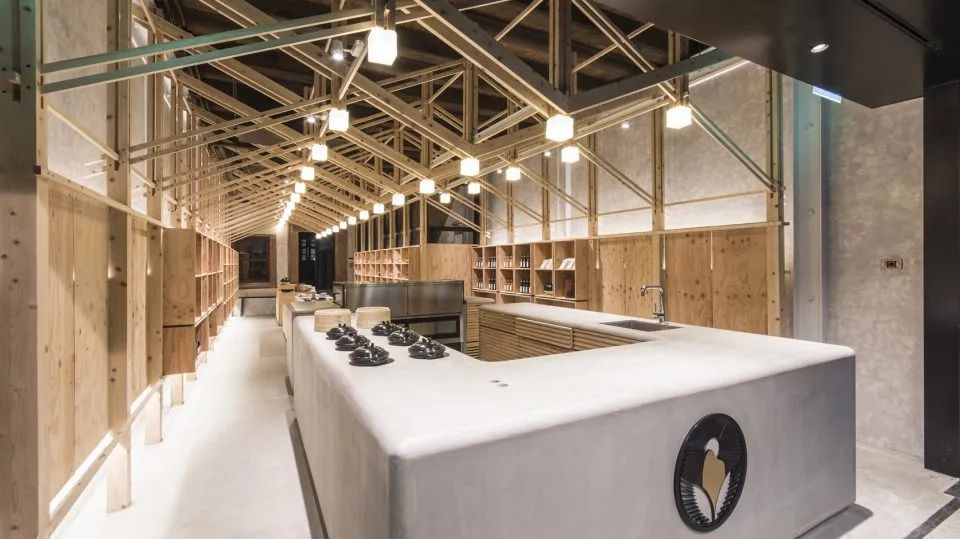 This illuminance distribution is very unfavorable for customers to see the goods, because a considerable number of goods are placed on the vertical plane most seen by people, which should be given special consideration.

At present, only horizontal illumination is paid attention to in store lighting, while vertical illumination is ignored, which is not conducive to commodity exhibition and sales, and will also affect sales speed and economic benefits. 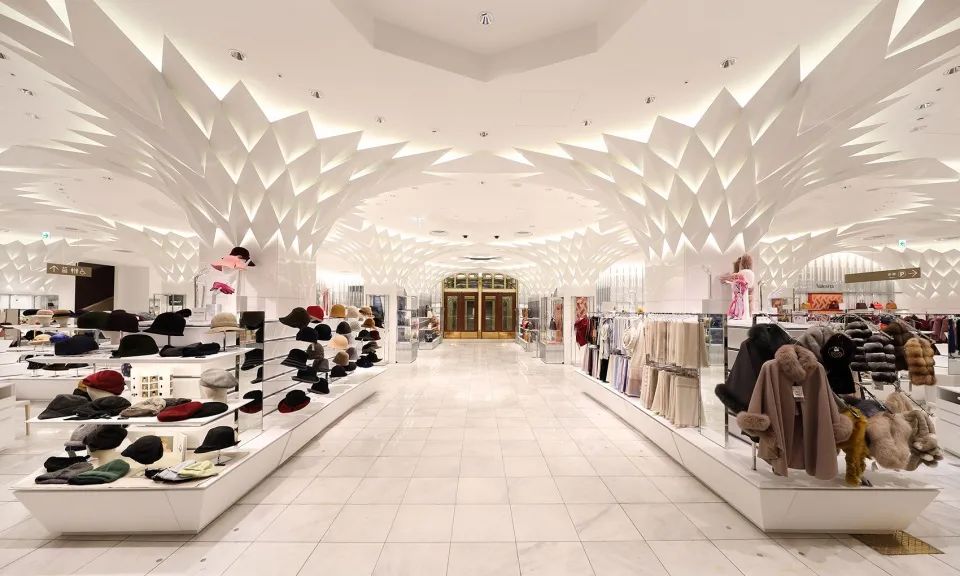 Although quite a few shops use a lot of electricity for lighting, customers still can't see the goods clearly, so it is reasonable to match different illumination requirements according to different functions.

It is more necessary to consider making corresponding provisions for different surface positions. This is conducive to distributing luminous flux as needed, saving electric energy and improving efficiency.

The lighting facilities of some old shops at home and abroad have been rebuilt according to this principle, and good economic benefits have been obtained. 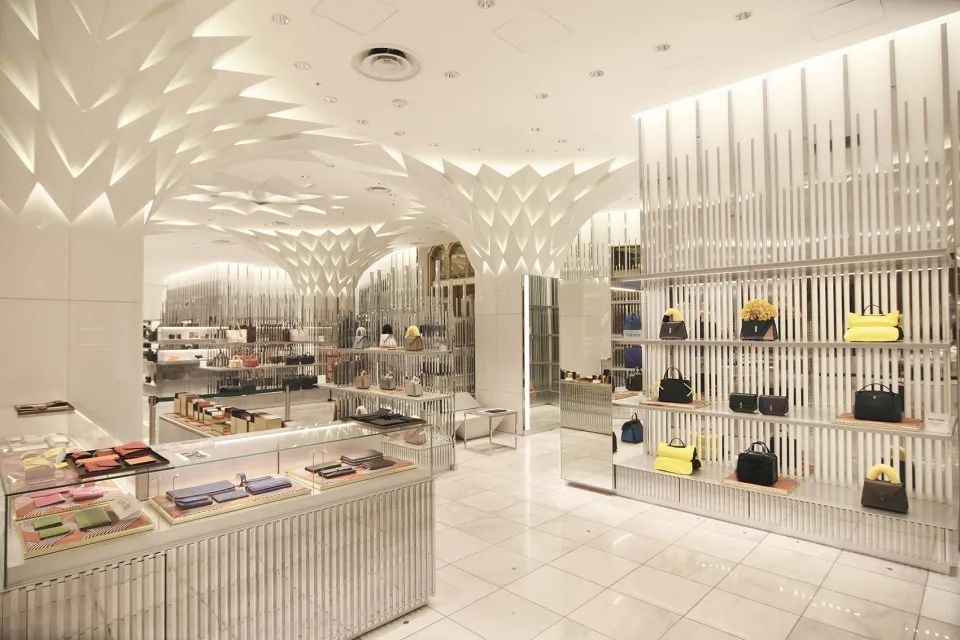 For example, in a store in Germany, the original lamps were evenly arranged on the ceiling of the store in a general way, and the illumination of the customer circulation area reached 700lx, while the illumination of the shelves was only 300 ~ 400lx.
After reconstruction, the former is reduced to 250 ~ 300lx and the latter is increased to 750 ~ 850lx. In this way, not only the turnover is increased by 10% ~ 20%, but also the lighting facilities are saved by 20%.

A store in Wuhan is also a representative of similar cases. It is reasonable and effective to distribute illuminance according to function.
In the survey of the store, we asked customers and store staff for their opinions on lighting.
The statistical results show that the illuminance value of containers (shelves) in the stores with satisfactory lighting exceeds 100lx; In stores with poor reflection, the illuminance of containers (shelves) is below 70lx.
The range of all illuminance values is divided into different levels according to the importance of the store specified in the code for design of store buildings, and different illuminance requirements are divided according to it. This can better reflect China's economic situation.
The actual survey of shop lighting also shows that there is little difference between unemployment and the difference is mainly reflected in the size of the city, as shown in the following figure: 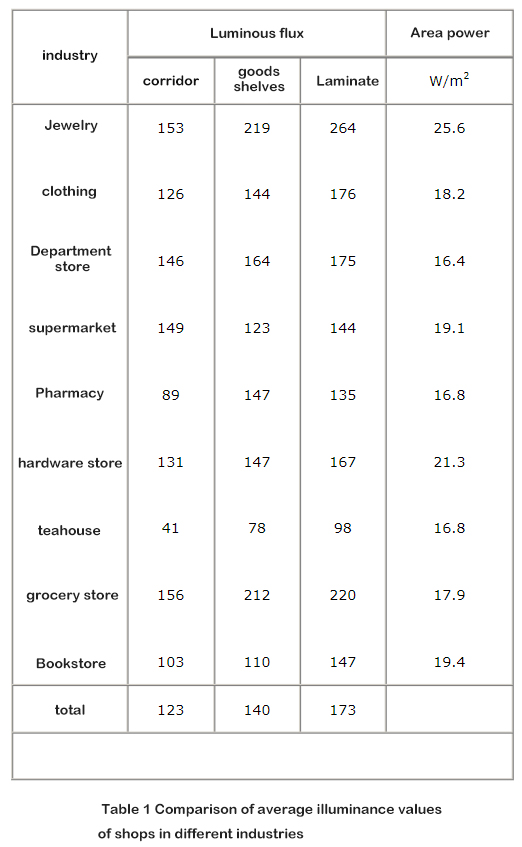 In terms of dividing functional zones, most foreign countries highlight kitchen windows and give them high illuminance values. Considering China's economic conditions, power supply and the current situation of stores, the code for design of store buildings does not list kitchen windows separately, but lists them with key displays, giving them higher illuminance.
There are two types of planes in the sales area.

One is the horizontal plane 0.9m away from the area, which represents the height of the counter top. Although this is inconsistent with the provisions of CIE, it is very close to the average value of the existing counter height of 0.8 ~ 1.0m in China.

In addition, a vertical shelf with a height of 1.5m is also specified. This height is the same in all countries. It is the most accessible position of the shelf and the best height for the eyes to see naturally.

The fitting room is the place where customers make the final decision on whether to buy goods, so it should have higher illumination than the sales area, so as to appreciate the details of goods more carefully. 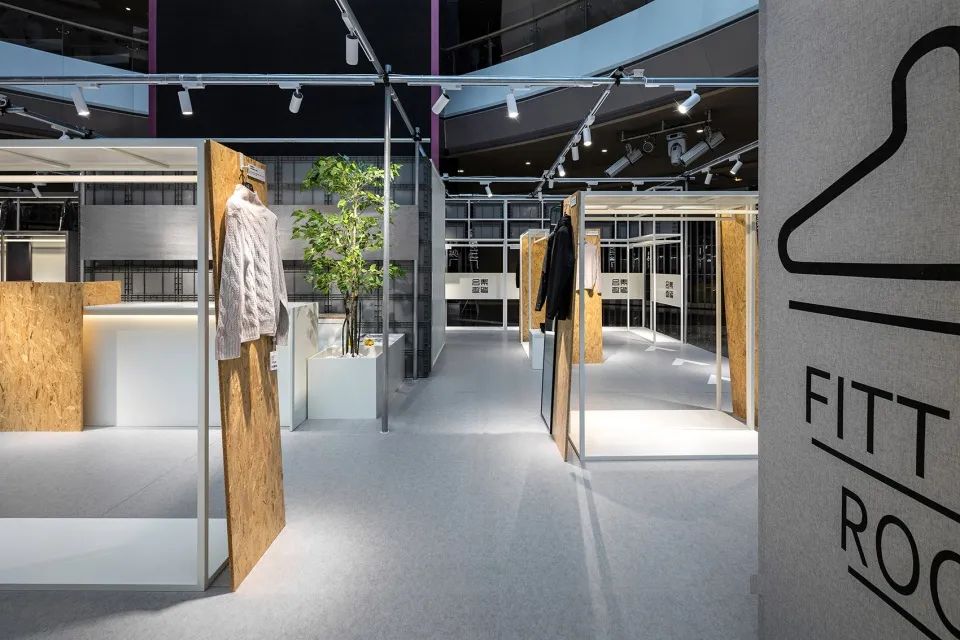 The collection office needs to carry out a large amount of cash and bills work. It requires that the work be concentrated and no errors are allowed. Generally, it requires high illumination.
In Japan, the cashier of any store uses the same illumination value, which is higher than the general illumination value in the store. Russia has similar provisions. The illuminance value in China is 1 level higher than that in the sales area.
Another shop with a special nature is the indoor vegetable market (the word "indoor" is different from the common vegetable market with a roof, no wall or few walls in the south. This kind of vegetable market mainly uses natural light and rarely operates at night).
The indoor vegetable market has a large volume of goods and a large volume of transactions. The goods are basically placed on the horizontal shelf, and the quantity of lighting is not high.
Australia stipulates that the passageway is 100lx and the counter is 300lx (the same as the general lighting of the store). In China, it is the illuminance value of the mobile area of general stores. 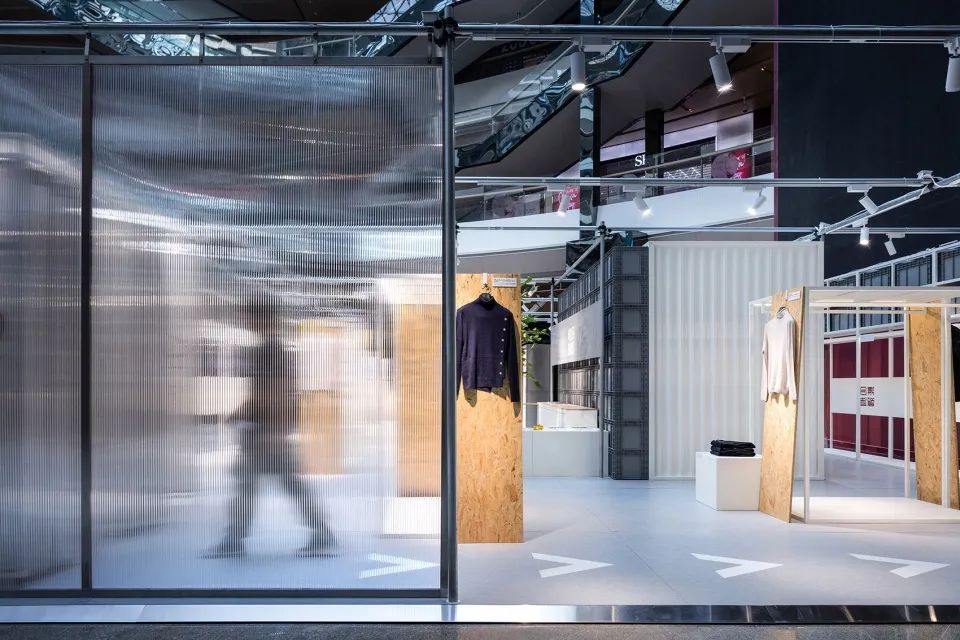 As the sales mode, display method and layout form of self-service stores (supermarkets) are different from those of ordinary stores, most countries list them separately, give them higher illuminance requirements, and specify the irradiation plane.

The lighting design of shop buildings also stipulates that the illuminance value is 1 level higher than that of ordinary shops.

Considering that the size and business of stores are very different (there is a transit warehouse attached to the business hall and an independent special warehouse).

In addition, considering that domestic warehouses are often supplemented by natural light (near the window), the lower value is taken, which is 4 levels lower than the sales area. Moreover, the goods are generally placed on shelves, so the calculation plane is set at the uniform height of 0.75m horizontal plane.


you have any questions, please consult seeposh.
The information comes from the network. If there is infringement, you can contact to delete it

In commercial lighting, how to consider the quality of lamps from an optical perspective?
Structural analysis of commercial LED lamps. Do you know all the functions of each component?
Lighting Design Case Effect of Four Seasons Hotel in Sao Paulo, Brazil
Five Skills of Lighting in High end Fashion Shop to Improve Sales
GIORGIO ARMANI opened a new boutique in Milan, come and watch the design effect
What lights are used in jewelry stores, watch shops, and commercial buildings?